The JR will fit most bicycles suitable for measuring with rim brakes. The diameter of the axle cannot be greater than 14mm. 15mm axles require slight modification and are available upon request. The diameter of the hub flanges, where the spokes attach, should not be greater than 52mm (2”).  The clearance from the forks to the spokes should be more than 12mm (1/2”).  These are very common dimensions. In general, simple, inexpensive bicycles seem to allow its installation better than expensive ones.  Features such as carbon-fiber forks, or beefy shocks on the front tend to be more problematic, but not always. If the drive tang does not engage the spokes when installed outside the nut that holds the bearing cone (jam nut), a wire can be laced through the spokes to drive the tang. Alternately, the JR can be installed between the jam nut and the bearing cone to help with tang engagement. If you have the tools and knowledge to keep your bearings properly adjusted this option is neater, and equally functional.
If your bicycle has disk brakes,to use the JR. The JR no modification is required. The Jones counter now mounts on the Right side of the front hub. 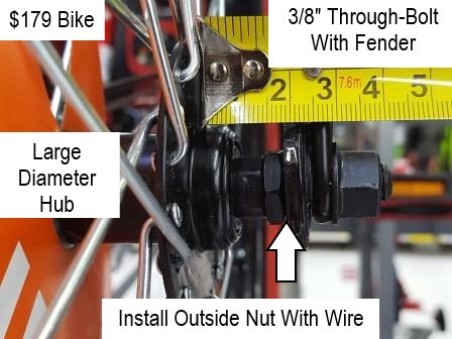 The manufacturer of the counter specifies the unit should not exceed 5,000 counts per minute, which equates to 27kph, or 17 mph on 700c x 35 tires, and slower on 26” tires. Many people have exceeded this briefly during routine riding without incident, however the limit exists, and failures have occurred. In one case, the user admitted to routinely exceeding 35 mph on a long downhill.

If there is any resistance to turning, first examine the setup. If there is resistance or excessive noise during operation, something is binding. Try a little spray silicone lubricant. - it's possible that this will seek out the binding and smooth out the operation.

Properly installed it does make a little noise, but sometimes prior to failure it sounds louder. It’s likely the unit was bent laying the bike down, or otherwise catching the counter on something loading or riding the bike. Possibly it’s getting worn out. In normal operation there should be little noise, and no “grinding” sound. Oil is often the cure for noise.

If you recognize the sound it makes is “different”, check to make sure the unit spins freely and the gears aren’t binding. If the gears mesh too tightly, you may have bent the chassis slightly. I’ve bent a couple straight, usually a slight tug on the counter is all it takes to get the gears to mesh properly again.

Can it be reset?

The counter does not have a reset button. Over the years Jones Counters have never had them. The counter is part of the measurement process, and the process includes review by a state certifier. Having people reset their count in the middle of a measurement, unless fully explained, can lead to confusion. Thus no great demand for a resettable counter has yet arisen.

What kind of bike should I use??

Almost any kind of bicycle can be used to measure .  Calibration constants for "Fat tires" vary due to temperature more than "skinny tires", and various solid tires have been studied. If you intend to measure a number of courses, you may consider acquiring a separate bicycle with optimal measuring characteristics. These are presented in no particular order of importance.

Why is there so much "slop" in the gears?

The clearance and gear engagement was studied closely during development. After thousands and thousands of miles of wear the hole at the center of the large gear will eventually get larger. The extra "play" in the gears accounts for movement, and allows for rotational forces to be tranferred to the counter shaft tangentially. To date not one black gear has worn out. It works, and it is simple.